Memberships are only available for purchase in the app for now. Want to send a download link to your phone?

TEXT ME THE LINK

Purchasing memberships directly on our website will be available soon.

Please enter your email address and we will email you a new password.

Are you sure you want to delete your account?

(This will permanently delete all of your data - purchases, game scores, ratings, etc)

NO, I WANT TO STAY

Your current username is: guest

Use your Fampay code to get access to the Play Magnus Plus Membership!

Anatoly Karpov, who was the undisputed World Chess Champion for a decade (1975 – 1985), not to mention the subsequent FIDE titles, turned 70 on May 23.

When it comes to public perception, Karpov seems to be somewhat underrated. Some people argue that there is a chance that he wouldn’t have beaten Bobby Fischer if the latter agreed to defend his title. Others point out that Karpov lost four out of five World Chess Championship matches against Garry Kasparov. Nevertheless, Chess24 acknowledged the arguments of Karpov’s fans and gave the legendary champion some credit, placing him at the #6 spot on the rankings of the greatest chess players of all time.

Anatoly Karpov holds himself in higher esteem. Here is what he recently replied to Sport-Express when former FIDE World Chess Champion Rustam Kasimdzhanov questioned him what his top-5 greatest chess players list looks like (translation by Colin McGourty for Chess24.com):

It’s hard to single out five - we’ve got a lot of great champions. But, as you ask, I’ll name Capablanca, Alekhine, Fischer, Karpov and Kasparov. I haven’t ranked them, but put them in chronological order. Perhaps someone will be surprised by the absence of Lasker, who held the chess crown over the course of 27 years. That record still hasn’t been beaten, but due to World War I no matches were held for nine years, and in 1921 he lost to Capablanca - one of the most talented and mysterious chess players in history, from a country where chess wasn’t highly developed.

Alekhine’s great achievements speak for themselves. They include the record for the number of international tournaments won - 76. I overtook him - I have 185 wins. That’s from the moment I became a Master of Sport, not counting children’s and junior tournaments. In general, I hold almost all the chess records. Kasparov also has no lack of brilliant victories.

Now on Fischer. His path to the World Championship title was impressive. To win 6:0 against Taimanov and Larsen, one of the strongest grandmasters of the 70s, is a fantastic result. And then his confident victory over Spassky. And the Capablanca Memorial in Havana in 1965? Due to sanctions the US State Department prevented Fischer from travelling to Cuba, but he found a way. He played his games by telegraph from New York and he performed brilliantly, only finishing half a point behind Smyslov. Fischer also led at the Sousse Interzonal, though due to a conflict with the organisers he didn’t finish the tournament…

Recently Magnus Carlsen ranked some of the World Chess Champions on genius, entertainment, influence, and sanity. Here is what he had to say about Anatoly Karpov:

Here is what Anatoly Karpov told RT on his birthday eve:

— Have you ever worked as a coach on other chess players’ teams?
— No, I have never been a coach. This is a different occupation. Although I have consulted some of the players.
— What if Magnus Carlsen requested your help? Would you accept the offer?
— No. I simply have no time for this.
— Is public and political work more interesting for you than a chance to, in a certain sense, return to your youth?
— I have a broad range of interests in life and wouldn’t sacrifice them for the sake of working with a single person. I don’t want to restrict myself. Nevertheless, I like Carlsen. He is a very strong player who plays in a similar fashion and style as I did. Very safe; exploiting even a minimal advantage. Magnus is confident in his powers and knows how to fight till the very end. In other words, he has many positive qualities. It is no accident that he has been keeping the World Chess Champion title for a relatively long time already.
— Do you think he is going to remain up there for long?
— If he doesn’t lose his head, he will last for some time. I think Ian Nepomniachtchi has chances to dethrone the Norwegian, but Ian is emotionally unstable. And for a World Chess Championship match, this is one of the key factors. One must have a stable, strong nervous system.

Are you interested in learning more Anatoly Karpov and other World Chess Champions mentioned in the article? Download Magnus Trainer, where you will find interactive lessons about all the World Chess Champions and their challengers, allowing you to see whether you can play as well as them or even improve on their game!

Play Magnus would like to congratulate Anatoly Karpov on his 70th anniversary and to offer you an opportunity to learn more about this outstanding Grandmaster by taking a special quiz. Twelve questions in honor of the 12th World Chess Champion! 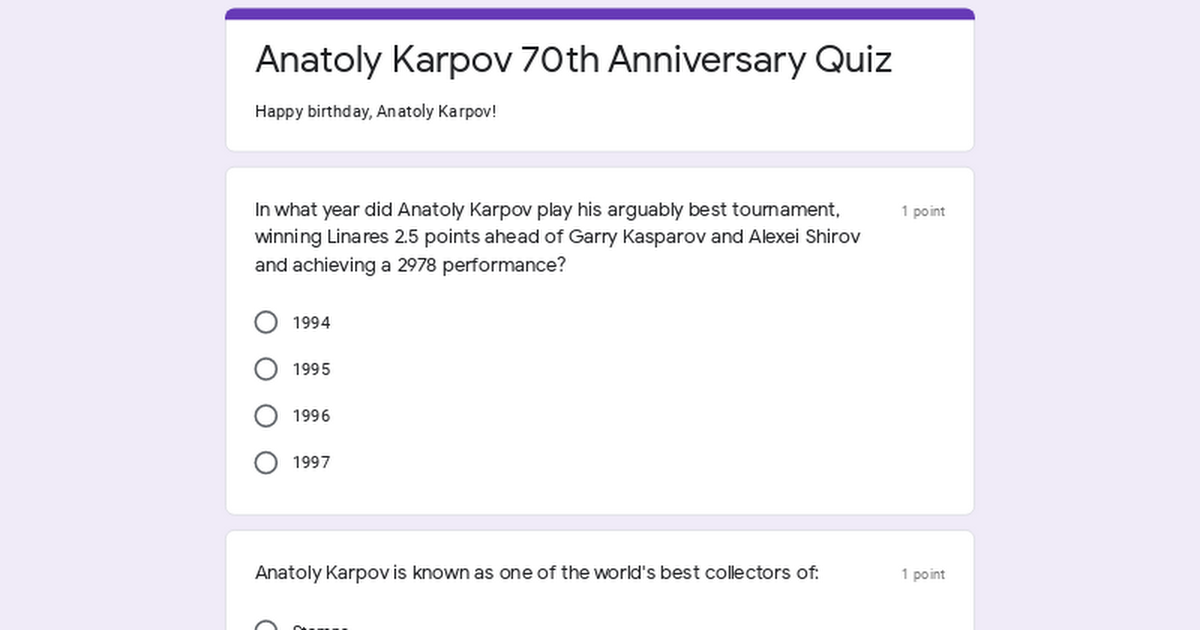 How to Choose Your Opponent in Chess

Interested in improving as a chess player? What opponents should you prefer to make the process as efficient as possible?
Read our previous post
Peter Zhdanov
-
20 May 2021

At What Age Do Chess Players Peak? Part 2

Let’s take a look at women’s chess and see at what age the Women’s World Chess Champions peaked.